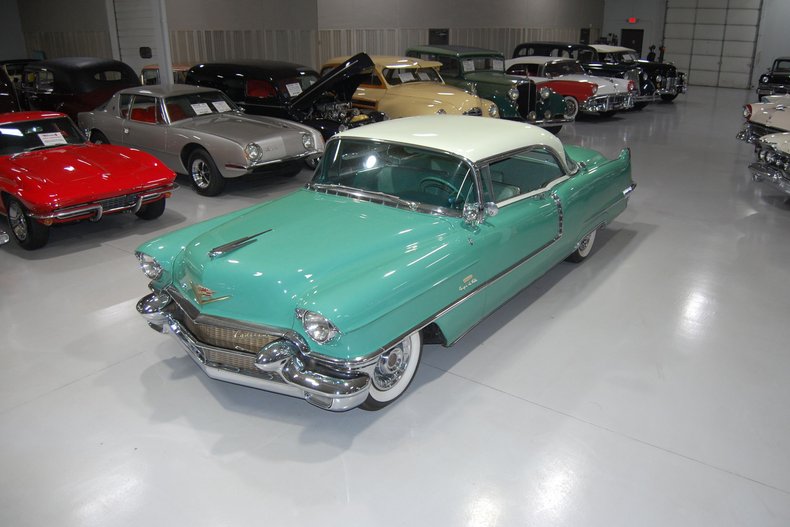 This 1956 Cadillac Series 62 Deluxe Coupe de Ville has a fantastic fifties look with great options! 1956 was a banner year for Cadillac with the company selling over 150,000 units for the first time in company history. Cadillac's huge sales numbers in '56 can be attributed to two primary factors. First, Cadillac's primary American luxury competition at the time were all struggling at the time. Packard was on its last legs as a company whereas Lincoln and Imperial were both struggling to gain traction amongst luxury car consumers. The second factor that contributed to Cadillac's success in 1956 was the company's extraordinary product offerings at the time. While the 1956 line of Cadillacs underwent modest stylistic updates, the cars remained unmistakably iconic. Cadillac described to newly redesigned front ends as having an "even more impressive [look of] strength, dignity and grace." The grilles in 1956 featured a fine crosshatched texture along with a new "Cadillac" script insignia. The amount of chrome on just the front end of the '56 Cadillacs is impressive as well. The hoods and fenders were also flattened out, enhancing the lower and wider look of the car. The "slip-stream" rear fender also added to the updated appearance of the 1956 Cadillac. New trim on the rear quarters as well as a more squared-off tail fins gave the '56 an elegant and more elevated look. The Series 62 was the entry-level Cadillac at the time and Coupe DeVille was once of the higher-trimmed body styles available for the Sixty-Two. Under the hood on this '56 Series 62 Coupe de Ville is a numbers matching 365 Cubic Inch V8 with a single 4 barrel carburetor that pushed out 285 horsepower in the day. Notably, 1956 was the first year that the Cadillac 365 V8 was standard equipment across the entire product line. The 365 V8 is mated to a Hydra-Matic Automatic Transmission which means that anybody can take this '56 Cadillac for spin. Dual thru-bumper exhaust gives this classic Cadillac a nice throaty sound. Being that Cadillac was a top-of-the-line luxury brand at the time, their cars came loaded with options. With Power Brakes, bringing this 4,445 pound cruiser to a stop is made much easier. Getting in and out of tight spaces is also simplified with Power Steering. This '56 Cadillac is even equipped with Air Conditioning which was offered as an optional accessory at an additional cost back in 1956. The exterior on this '56 Coupe Deville has been beautifully refinished in its original two-tone color scheme consisting of Princess Green and Duchess Green. This 1956 Cadillac rides on 4 wide whitewall radial tires with full wheelcovers, which gives this Coupe de Ville a fantastic look. The interior on this '56 Coupe DeVille is gorgeous. The front and rear bench seats are correctly upholstered in Light Green Leather with Light Green Bombay Pattern Metallic Nylon Cloth inserts. The dash, door panels and steering wheel appear to be in their stock configuration and have that elevated Cadillac style. The dash is equipped with an Autronic eye, 120 MPH Speedometer, temperature gauge, fuel gauge, signal seeking AM radio, and clock. This '56 Series Sixty Two is also outfitted with power windows which is another welcome option on this luxurious Cadillac. Whether you're an established Cadillac collector or you're shopping for your very first classic car, this 1956 Cadillac Series 62 Coupe de Ville would make a superb choice. Give us a call today!