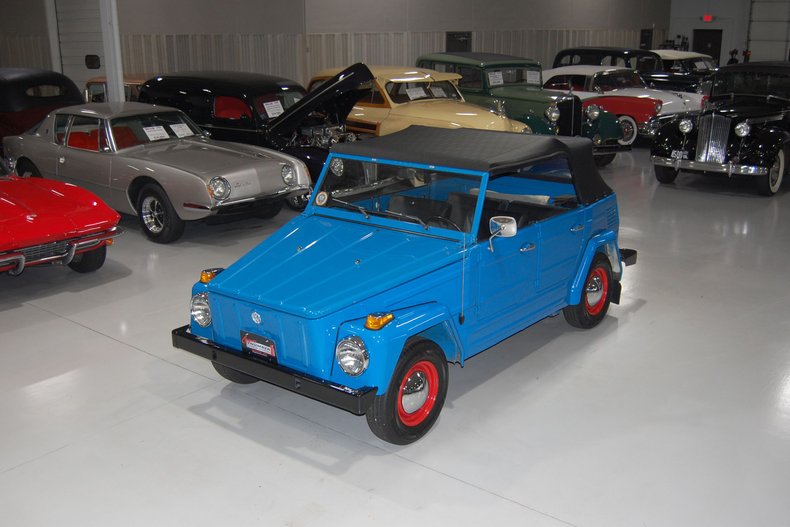 This 1973 Volkswagen Thing has the super cool look of a dune buggy with the drivability of a real car and has 40+ years of Southern History. With initial sales of the Thing starting in 1972, its origins date back a few years earlier. In 1969, the Thing started out as an updated version "Kubelwagen" which was the German military's version of the Jeep at the time. Rather than creating an entirely new set of parts for this new vehicle, Volkswagen instead opted to utilizing parts from its other lines. Volkswagen borrowed the drivetrain components from the Beetle and the suspension came from its Type II Transporter. The resulting vehicle was deemed the Type 181 (or 182 for right-hand drive models) and would be known as "The Thing" when sold in the United States. While the Thing was designed in Germany, it was actually manufactured in Mexico and then imported into the US for American consumers. With 28,930 Things produced between the two years of production of 1973 and 1974, seeing a Thing on the road or at your local car show is a rarity. This particular VW Thing comes to us from southern-based collectors who kept this early SUV in great shape since the early 80s. The air-cooled and rear-mounted 1584CC Inline 4 cylinder engine on the Thing is paired with a single barrel carburetor and pushed out 46 horsepower in its day. Taking this Thing for a ride is blast because the 1.6L engine is hooked up to a 4 speed manual transmission with a floor mounted shifter. The exterior has a fantastic look having been refinished in a beautiful Azul Acapulco Blue paint. The black vinyl convertible top is in fantastic shape as are the included matching side curtains. This Volkswagen rides on 4 new Hankook Radial Tires wrapped around painted red steel rims with hubcaps, which gives this Thing a cool look and a great ride. The interior on this Thing appears to be stock and is in wonderful condition. The front bucket seats and rear bench seat have been reupholstered in black vinyl. The doors are removable and are in fantastic shape. The dash and steering wheel are also in superb condition and appear to be in their stock configuration. The dash is equipped with a 100 MPH speedometer, fuel gauge and AM radio. Whether you're looking for your very first classic car or you want to add a Volkswagen to your existing collection or you're just looking for a super cool beach buggy, this 1973 Volkswagen Thing would make an excellent choice. Give us a call today!