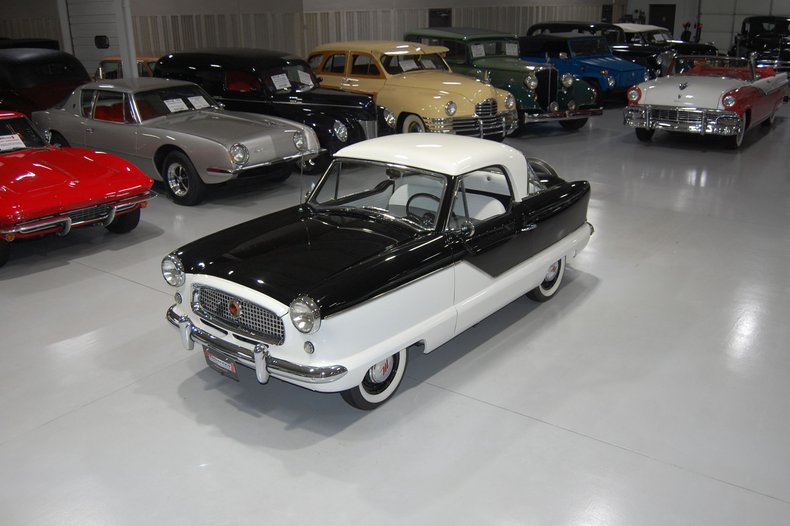 This 1959 Nash Metropolitan Coupe is a beautifully restored economy car that was clearly the beneficiary of a rotisserie restoration. The story behind the inception of the Metropolitan is quite rich. The idea behind the Nash Metropolitan was an economy car and is believed to be the first American sub-compact car. However, the idea that the Metropolitan was an American built automobile is a bit of a misnomer given the fact that the drivetrain came from the British Austin Motor Company, the bodies were built by Fisher & Ludlow out of Great Britain, and the cars were assembled in Austin's Longbridge Plant in Birmingham, England. In 1954, after Nash and Hudson merged to form the American Motors Company (AMC), they began importing the already assembled Metropolitans and began offering them for sale. A few years later the second series Metropolitans were introduced with the larger and more powerful Austin A50 1.5L engine and they were sold through Rambler dealers. The 1959 was the most popular year for the Metropolitan with over 22,000 produced. The '59 models also received some new styling and features including trunk lids and vent windows. This particular Metropolitan underwent a rotisserie restoration and has been well-cared for ever since. Under the hood on this Nash is a beautifully detailed 90.9 Cubic Inch (1489 CC) Inline 4 Cylinder engine with a single barrel carburetor that pushed out 52 horsepower in its day. The 1.5L engine is hooked up to a 3 speed manual transmission. While the shifter on the Metropolitan seems like a column-mounted "three-on-the-tree," it is actually mounted on the dash but has the same look and feel. The exterior on this Metropolitan has been beautifully refinished in its original two-tone color scheme of Classic Black and Frost White. This '59 Nash rides on 4 wide whitewall radial tires on steel wheel with "M" Logo Hubcaps. A rear-mounted Continental Kit houses a spare tire as well and completes the car's classic 50's look. The interior on this Metropolitan is stunning! The front and rear bench seats have been correctly reupholstered in Black and White Vinyl with Grey Diamond Patterned fabric inserts, which beautifully matches the exterior look of the car. The dash, door panels and steering wheel are all in fantastic condition and appear to be in their stock configuration. The dash is equipped with a 80 MPH speedometer, fuel gauge, and AM radio. Whether you're an established Metropolitan collector or you're looking for your very first classic car, this 1959 Nash Metropolitan Coupe would be an excellent choice. Give us a call today!