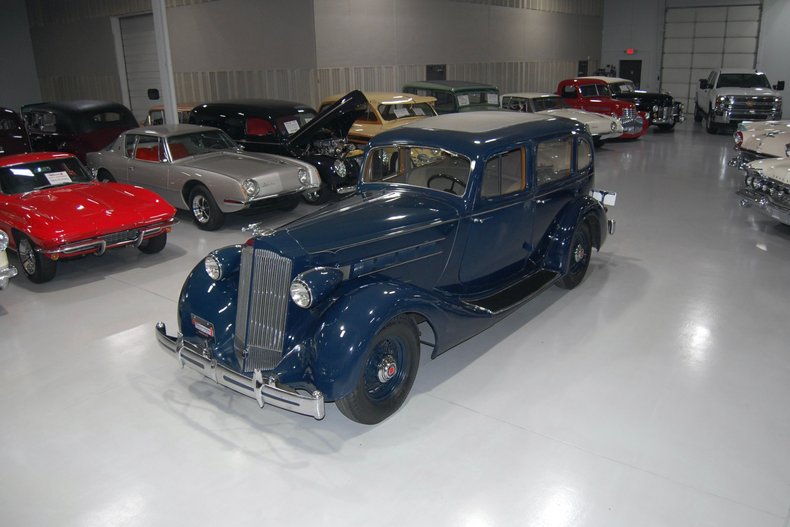 This 1936 Packard Eight Sedan is a rare, luxurious pre-war automobile that has been deemed a "True Classic" by the Classic Car Club of America (CCCA). In 1936, Packard's offerings were divided into two categories, its traditional more-expensive senior automobiles (including the Eights, Super Eights, and Twelves) and its newer, cheaper 120 models for the more budget-conscious consumer. The Eight Sedan had an initial purchase price of $2,385, which was more than twice as much as the cheaper 120 Sedans. Due to the success of its more inexpensive 120 models along with the economy beginning to turn upwards from the Great Depression, Packard's sales started to rebound. In total, Packard built a total of 3,973 of its Model Eights which didn't compare to the much more popular, albeit inexpensive, 120 Models. The 1400 Sedans were largely unchanged in 1936 from the previous year. The radiators became more sloped with the fenders were adjusted accordingly, plus chrome was added to the headlight housing. This particular Packard Sedan was originally delivered to The John B. Todd Company of Plattsburgh, NY on June 9, 1936, and spent the past nearly 50 years in the hands of Florida-based collectors. Under the hood on this '36 Packard Eight is a 320 Cubic Inch L-Head Straight 8 with a single barrel carburetor that pushed out 130 horsepower back in 1936. The 320 Inline 8 is hooked up to a 3 speed manual transmission with a floor-mounted shifter, making this antique 5 passenger sedan a hoot to drive. The Orleans Blue exterior paint is beginning to show a bit of patina but overall is in decent shape. Sitting on matching wire wheels with Packard 8 hubcaps and blackwall bias ply tires, this 1936 Packard Eight has a very nice period correct look. The interior in this Packard is fantastic! The front and rear bench seats have been beautifully reupholstered in a beige broadcloth, which gives this classic car a nice period correct look. The interior door panels on all 4 suicide doors, along with the interior walls, have been reupholstered in matching beige broadcloth as well. The dash and around the interior windows is finished in a beautiful woodgrain, giving the car an elevated, luxurious look. The dash appears to be in its stock configuration and is equipped with a 120 MPH speedometer, amp gauge, oil pressure gauge, temperature gauge, fuel gauge, AM radio, and clock. Whether you're looking for a true classic to add to your collection or you're looking for your very first one, this 1936 Packard Eight Sedan is an excellent choice. Give us a call today!