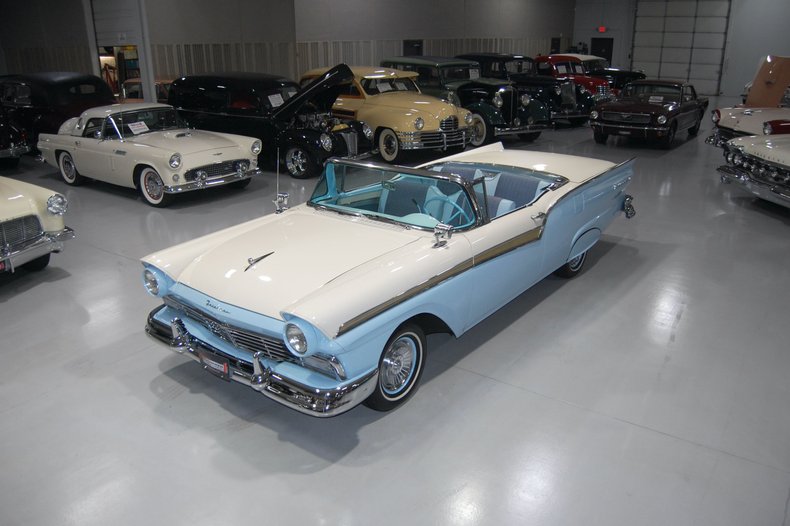 This 1957 Ford Fairlane 500 Skyliner Retractable is a super cool retractable hardtop with a fantastic 50s look. Debuting in 1955, Ford's Fairlane was an instant hit, so much so that Ford left the majority of the design of the '56 Fairlanes alone except for a few minor changes. In its 3rd year, Ford completely redesigned the look of its top-of-the-line model, the Fairlane, giving it a more updated, sleeker look. The bodies became longer and narrower, and the rear quarters featured a new winged look, which together simulated a more aerodynamic appearance. The front ends on Ford's 1957 products were also redesigned in 1957 which gave the cars a streamlined look. 1957 was also a big deal for Ford because it marked the introduction of the retractable hardtop, which had been under development for a number of years. Originally slated for the Continental Mark II, Ford incorporated the revolutionary retractable design into its Fairlane. The retractable hardtop is a mechanical sensation comprised of 10 solenoids, 7 high-torque motors, 610 feet of wire, along with numerous relays and microswitches, and it allows the hardtop to be mechanically lifted off (and on) the Fairlane and stowed completely retracted into the trunk area. When the new retractable hardtops debuted to the public at the New York Auto Show on December 8, 1956, they were an instant success with critics. It is also believed that despite selling nearly 21,000 units, Ford was probably unable to recoup its entire investment into the research and development of the retractable. Under the hood on this '57 Skyliner is a 312 Cubic Inch V8 engine with a single 2 barrel carburetor which is hooked up to an Automatic Transmission that anybody can drive. Dual exhaust gives this classic Ford retractable a nice throaty sound. With Power Steering, getting in and out of tight spaces is made much easier and the overall driving experience is much improved. The exterior on this 1957 Ford has been refinished in a beautiful two-tone color scheme comprised of Starmist Blue with Colonial White. Sitting on whitewall radial tires with full Ford wheelcovers, this '57 Skyliner has a great look and an even better ride. The rear wheels are also tucked behind a pair of beautiful fender skirts for that classic 50s appearance. The front and rear bench seats have been reupholstered in a beautiful Blue Vinyl with Blue Airweave Cloth Inserts complementing the overall look of the car. The dash, door panels, and steering wheel are all in nice shape as well and appear to be in their stock configuration. The dash is equipped with a 120 MPH speedometer, temperature gauge and fuel gauge, along with an AM radio and clock. A Sunpro oil pressure gauge has also been tucked neatly under the dash for additional information. Whether you're looking for your very first classic car or you're a retractable aficionado, this 1957 Ford Fairlane 500 Skyliner Retractable would be an excellent choice. Give us a call today!