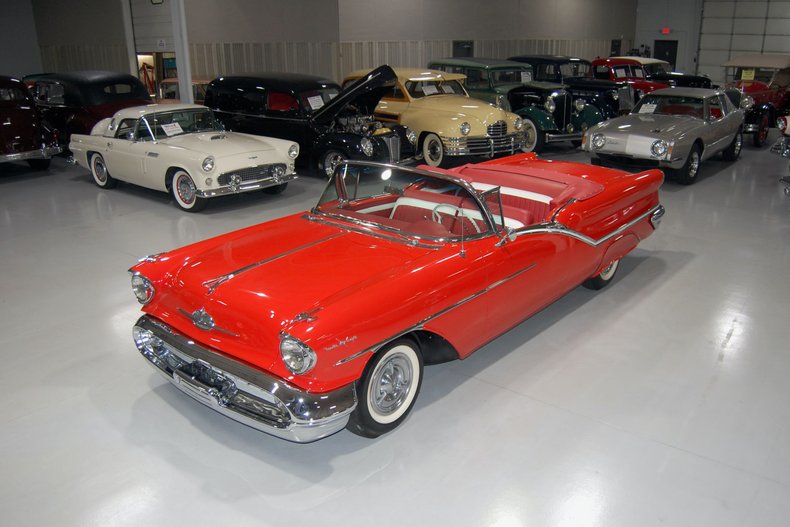 This 1957 Oldsmobile Starfire 98 Convertible underwent an extensive frame-off rotisserie restoration and has a spectacular look both inside and out. Oldsmobile debuted its 1957 model year cars on November 9, 1956, and the new Oldsmobiles featured significant design changes while closing out the era for its "Futuramic" styling. The grilles with their deep chromed look were updated in 1957 but harkened back to the look of the previous year models. The big stylistic leap forward occurred on the rear end treatment which featured larger, more distinctive taillights. The top-of-the-line car for Oldsmobile in 1957 was its Starfire Ninety-Eight. The convertible Starfire 98s were the most expensive car produced by Oldsmobile at the time and are therefore were one of the rarest '57 Oldsmobiles today. 1957 was also a notable year for Oldsmobiles on the Nascar Circuit. Driven by notable driver at the time Lee Petty, father of "The King" Richard Petty, Oldsmobiles were taking many races in large part due to the new J-2 engine setup and gave Chrysler's Hemi some serious competition. The J-2 featured a trifecta of Dual Barrel Carburetors that with several additional upgrades created 300 horsepower. Due to all of this extra power, Nascar ended up banning multi-carburetor setups from its races in the middle of the 1957 racing season but the J2 was still available to purchase on all Oldsmobiles at that time for an extra $83. This particular Ninety-Eight Starfire underwent a complete frame-off rotisserie restoration recently and has fewer than 100 miles on it since it was restored. Under the hood on this 98 Convertible is a 371 Cubic Inch J-2 Golden Rocket V8 engine that is equipped with 3 dual barrel carburetors for lots of extra power. A Hydra-Matic Automatic Transmission is hooked up to the the J-2 371 V8 ensuring that just about anybody can take this beauty for a spin around the block. Being that the Ninety-Eights were to flagship model for Oldsmobile in 1957, they came loaded with options. Power steering is always a huge benefit because it makes getting in and out of tight spaces nearly effortless and improves the overall driving experience. With Power Brakes, bringing this stunning 98 Convertible to a stop is made much easier especially with all of that extra horsepower generated by the J-2 under the hood. Electric power windows were also standard equipment on all of the Ninety-Eights produced in 1957. The White Vinyl Power Convertible Top is in excellent condition and goes up and down with the simple toggle of a switch. The chrome and brightwork around the exterior of this Ninety Eight is outstanding. Dual exhaust gives this classic Olds a nice throaty sound. The exterior on this 1957 Oldsmobile has been refinished in its original color, Festival Red, and the paint on this car is stunning! Riding on wide whitewall bias-ply tires with full Oldsmobiles wheelcovers, this '57 Starfire 98 Convertible has a fantastic 50s look. The interior on this Starfire Ninety Eight is sensational! The front and rear bench seats have been reupholstered in Red Leather along with white leather accents. The dash, door panels, and steering wheel are all in fantastic condition as well and appear to be in their stock configuration. The dash is equipped with a 120 MPH Speedometer, fuel gauge, wonderbar radio and clock. Also incorporated into the dash are the air vents for the factory air conditioning system that this car is equipped with so that you can stay cool even on the hottest summer days. Whether you're looking for your very first classic car or your garage is full of 50s cruisers, this 1957 Oldsmobile Starfire 98 Convertible would be an excellent choice. Give us a call today!