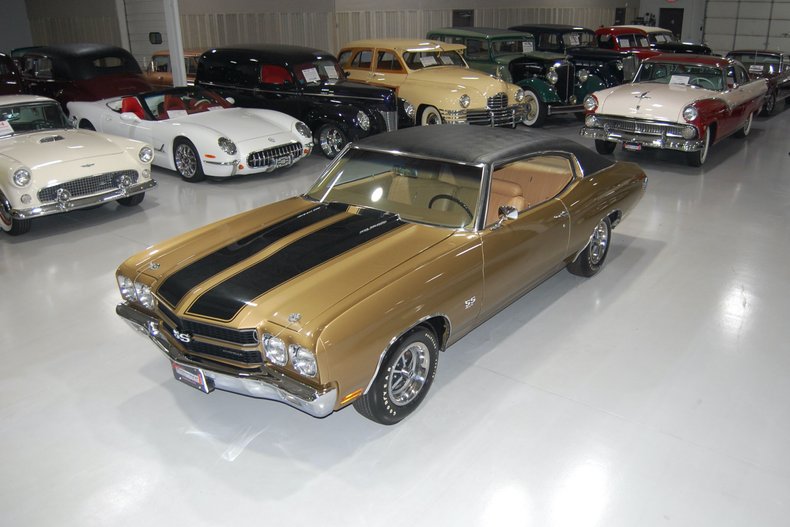 This 1970 Chevrolet Chevelle SS 454 LS6 is a real deal LS6 that is in absolutely stunning condition! When you think of the hypothetical Mount Rushmore of Muscle Cars, the '70 LS6 Chevelle has to be one of those 4 cars. In 1970, the Chevelle was once again redesigned with more sculpted body lines and a bolder-looking front end with a split grille and dual headlights. 2 Super Sport packages were available for the new-look 1970 Chevelle as well, the RPO Z25 SS 396 and the pinnacle RPO Z15 SS 454. Included in the SS upgrade is a blacked out grille, wheelwell moldings, black rear bumper insert panels, five-spoke sport wheels, special SS trim, and a special black-faced dash panel with rounded gauges. The biggest deal for Chevelle Super Sports in 1970, of course, were the engine options with the 360 horsepower LS5 and the legendary 450 horsepower LS6. Of the nearly half million Chevelles produced in 1970, only 62,372 were ordered as Super Sports, and out of those only 4,475 were ordered with the top-of-the-line LS6 engine package, which makes this particular '70 Chevelle SS an extremely special car. This particular LS6 Chevelle underwent an extensive frame off restoration a number of years back and is sold with its original build sheet. Under the Cowl Induction (RPO ZL2) hood on this bad boy is the numbers matching 454 Cubic Inch LS6 V8 engine paired with a single 4 barrel carburetor that pushed out 450 horsepower in its day. A Muncie M22 "Rock Crusher" 4 speed manual transmission backs up to the 454 LS-6 V8, making this Super Sport an absolute blast to drive. This '70 Chevelle SS is a very well optioned car as well. This Chevelle was ordered with and is equipped with power front disc brakes (RPO J50, RPO JL2), providing plenty of extra stopping power for all of that extra muscle under the cowl induction hood. With Power Steering, getting in and out of tight spaces is made much easier and improves on the overall driving experience. A positraction rear axle ensures that the rubber sticks to pavement especially with all of that extra power. Dual exhaust gives this classic Chevy a nice throaty sound. The exterior on this LS-6 Chevelle SS has been beautifully refinished in its original color scheme of Autumn Gold with Black Stripes and a Black Vinyl Top, all of which are in superb condition. Sitting on 4 Sport Rims with Goodyear Polyglas F70-14 raised letter bias-ply tires, this Chevelle Super Sport looks just as good as it did sitting on the Riley Chevrolet showroom floor back in 1970. The interior on this LS6 SS Chevelle looks like it's brand new! The front split bench seat, rear bench, door panels, and headliner have all been reupholstered in beautiful Saddle vinyl giving this Chevelle a fresh look and feel. The SS Steering wheel and Saddle carpeting also appear to be in fantastic condition. The matching saddle dash with the special SS black insert has a wonderful look as well, appearing to be in its stock configuration. The dash is equipped with a 120 MPH speedometer, 7,000 RPM tachometer, amp gauge, temperature gauge, clock, and AM radio, and of course all of the gauges are rounded since they are in a Chevelle SS. Whether you're looking to purchase your very first classic car or you have a garage filled with LS5 and LS6 Chevelles, this 1970 Chevrolet Chevelle SS 454 LS6 would be an excellent choice. Give us a call today!