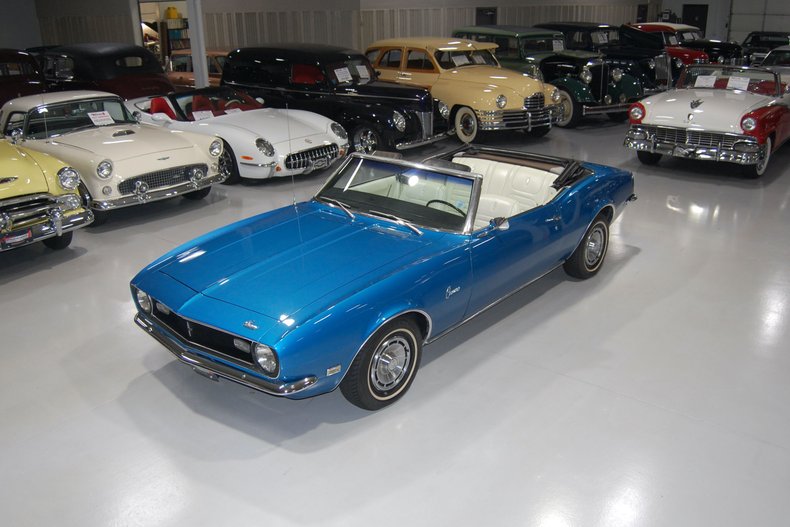 This 1968 Chevrolet Camaro Convertible is a nicely cared for example and has been owned by the same owner since new. 1967 was the first year for Chevrolet's new Camaro model, marking Chevy's entry into the growing Pony Car market at the time. They were small and sporty, and catered to consumer demand for high-performance cars at a more modest price. The first year for the Camaro was a mega-hit for Chevrolet so little changed between 1967 and 1968. The front vent windows were removed for a more open look and front rectangular market lights were added as well. This particular Camaro has a storied history due to the fact that it was owned by one owner since it was newly purchased at Misle Chevrolet in Lincoln, Nebraska. The original owner, who was a young up-coming attorney at the time, had actually purchased a '67 model as a fun cruiser to drive in the summer time instead of his daily driver which he drove in the winter. One day, he parked his 1967 Camaro outside of the courthouse while he was arguing a pro-bono case. When he finished in court and walked outside of the courthouse, he discovered that his '67 Camaro had been stolen. To replace his 1967 Camaro, his insurance company gave him the funds to purchase a new '68 Camaro Convertible (which is this car). This '68 Camaro was his summer cruiser in Nebraska until roughly 20 years ago when he retired and he (and the car) moved to Florida. This Camaro remained his fun second car in Florida during his retirement all the way up until his recent passing. Under the hood on this Camaro is a numbers matching 250 Cubic Inch Inline 6 Cylinder engine with a single barrel carburetor that pushed out 155 horsepower in its day. Anybody can drive this little Chevy because the numbers matching 6 banger is hooked up to a Powerglide Automatic Transmission that is shifted using a horseshoe shifter. The black vinyl power convertible top is in wonderful shape and goes up and down with the simple toggle of a switch. With Power Steering, you can get in and out of tight spaces with ease. The exterior on this Camaro Convertible has been beautifully refinished in its original color, Lemans Blue. P125/75/R14 thin Whitewall Radial Tires with full wheelcovers complete the exterior look of the car. The interior on this classic Chevy is fantastic. The parchment front bucket seats and rear bench seat were recently reconditioned and have a fantastic look. The woodgrain dash, door panels, center console, and tilt steering wheel all appear to be in their stock configuration and are in fantastic shape. The dash is equipped with a 120 MPH speedometer, fuel gauge, as well as the AM/FM Radio and clock. If you're looking for a fun summer convertible with a fantastic story, this 1968 Chevrolet Camaro Convertible is the car for you. Give us a call today!