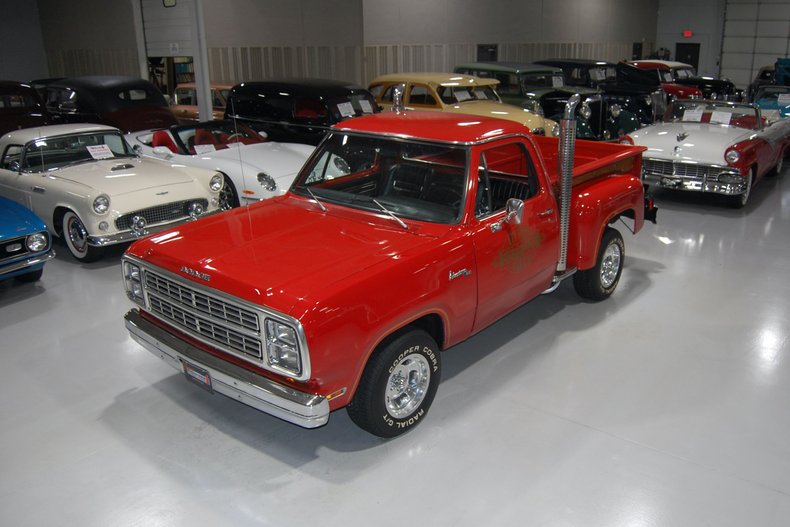 This 1979 Dodge Lil' Red Express is a slick looking, performance machine that anybody can enjoy. For the American automobile industry, the 1970s, and especially the later half of the decade, is typically thought of as a lower point for performance cars. The newly enacted federal government regulations in the early to mid 70s forced American car manufacturers to start producing more energy efficient, lower-emissions cars, sacrificing significant performance under the hood. Of course, like many government regulations, there was a loophole – trucks. Unlike the new cars of the day, new trucks were exempt from the strict new emissions standards. Therefore, auto manufacturers could produce performance-oriented vehicles but they just had to built as a truck. In the late 70s, Dodge advertised a group of vehicles known as "The Adult Toys From Dodge" comprised of the Warlock, Ramcharger, Street Van, and, of course, the Lil' Red Express. These vehicles were way ahead of their time, from the Ramcharger Sports Utility Vehicle (SUV) to the Warlock and Lil' Red Express performance pickup trucks. The Lil' Red Trucks had an iconic look with a bright Canyon Red paint scheme, elevated wood paneling, special decals, and perhaps its most iconic feature, dual chrome vertically-mounted exhaust pipes with heat shields. The Lil' Red Express trucks were not only eye catching rigs, they were also the fastest production cars on the road. Under the hood on this pickup truck is a 360 Cubic Inch V8 engine paired with a single 4 barrel carburetor that pushed out 225 horsepower in its day. Anybody can drive this classic mopar pickup truck since the performance motor is hooked up to an automatic transmission. These Dodge pickups were very well optioned. Power steering makes sure that you can get in and out of tight spaces easily. With Power Brakes, this Lil Red Express has plenty of stopping power for all of that muscle under the hood. This Lil Red Express is also equipped with air conditioning so that you can stay cool while cruising down the road. The exterior is finished in eye-catching Canyon Red with golden decals so that there is no mistaking this Lil Red Express for a regular 78 Dodge Pickup. The wood paneling and bed are in nice shape and give the truck a more luxurious look. The steel box and tailgate are in good shape as well. Sitting on 4 Raised Letter Cooper Cobra Radial G/T tires wrapped around chrome rally rims, this adult toy from Dodge has a sporty look. The interior on this Lil' Red Dodge is fantastic! The bench seat appears to have been recently reupholstered in a beautiful black imitation leather. The dash, door panels, black carpeting and "Tuff" steering wheel are all in wonderful condition. The dash appears to be in its stock configuration, equipped with an 85 MPH speedometer, alternator gauge, temperature gauge, fuel gauge, and oil pressure gauge, as well as the air conditioning controls and AM/FM/Cassette entertainment system.