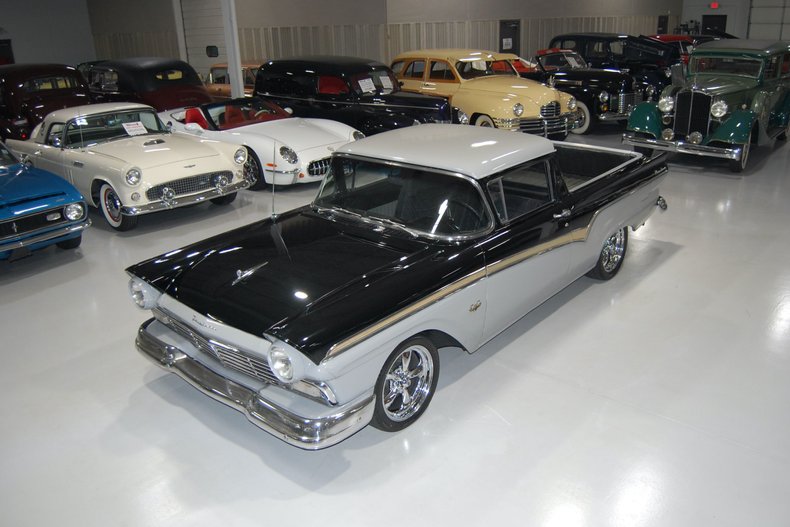 This 1957 Ford Ranchero has a fantastic custom exterior appearance with some serious muscle under the hood. 1957 was the first year for Ford's new "sedan-pickup," the Ranchero, debuting at the National Automobile Show in New York. However, Ford's Australian division began marketing the Ute, which was inspiration for the Ranchero, more than 20 years earlier. Due to the Ute's success on the Australian market, Ford decided to bring the revolutionary design state-side with the introduction of the Ranchero. Ford originally offered 2 Ranchero models, the standard Ranchero and the flashier, stepped-up Custom Ranchero. Ranchero sales were quite promising in 1957 with Ford selling over 20,000 vehicles in the first year. These early Rancheros were essentially a standard Ford Ranch Wagon with the rear half converted into a pickup. The Ranchero was touted for its sleek sedan look combined with the utilitarian usability of a light-duty pickup truck. Ford's advertising materials called it "More than a car! More than a truck!" This particular Ranchero has been customized both inside and out, and spent the past 15+ years in the hands of southern-based collectors. Under the hood is a 428 Cubic Inch Ford V8 with dual 4 barrel carburetors which is a major upgrade from the top-of-the-line 292 V8 that originally came on the Custom Pickups. Driving this Ranchero Custom is a blast with a 4 Speed Manual on the floor and the big block Ford engine really allows you to go through all of the gears. Dual side-exit exhaust gives this big block truck a nice throaty sound. The exterior brightwork and trim has a fantastic look and gives this utility vehicle a nice dressed-up look. This truck has a great stance sitting on Rev Classic Chrome Wheels with 225/45R17 radial tires in Front and 245/45R17 radial tires in the rear which give this pickup a great look and an even better ride. The steel truck bed is in fantastic condition and has been coated in a Rhino-type liner for improved protection. This Ranchero has been repainted to give it a mild custom two-tone look in Raven Black and Gunsmoke Gray. The interior on this Ranchero has a mild custom look as well. The original vinyl bench has been upgraded to a comfier later model split bench re-covered in black velour with "57 Ranchero" embroidered across the backs. The black painted dash has a mostly original look with a few upgrades tucked underneath. The dash is equipped with a 120 MPH speedometer, fuel gauge, and temperature gauge, along with an AM Radio and clock. An 8,000 RPM Sunpro Super Tach II has been mounted to the steering column giving the truck that old-school drag race look and feel. Temperature, volt, and oil pressure accessory gauges have been tucked neatly under the dash as well. An AM/FM/Cassette entertainment system has been tastefully incorporated under/behind the driver's seat to maintain a stock look while allowing you to listen to all of your tunes rolling down the road. Perhaps the most desirable option on this Ranchero Custom is the original-type air conditioning unit mounted under the dash so that you can stay cool cruising down the road. Whether you're looking for your very first classic car or truck, or you're looking to add to your collection, this 1957 Ford Ranchero Custom Pickup would make an excellent choice. Give us a call today!