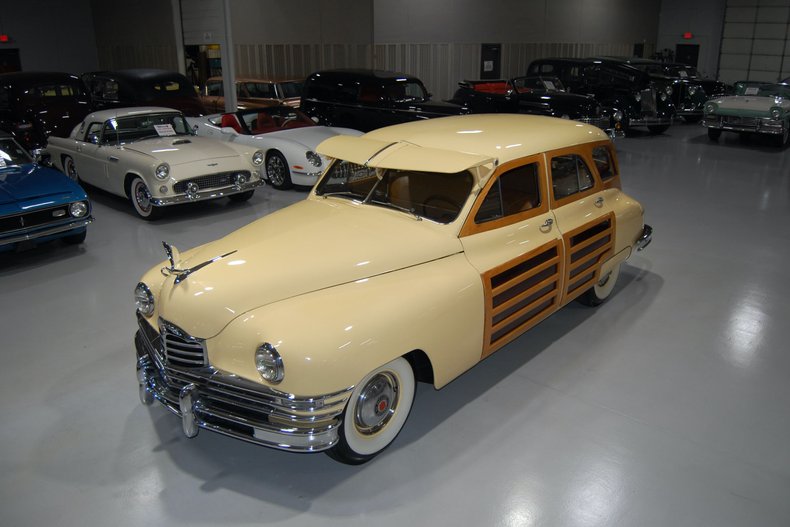 This 1948 Packard Eight Station Sedan Woody is a beautifully restored, post-war Packard that was a former Concours d'Elegance participant. After World War II, the independent automobile manufacturers (including Packard) were at a crossroad. The Big Three started releasing their post-war designs and many independents found that it was quite expensive to make the switch. Nonetheless, Packard updated its styling in an attempt to remain competitive with the Big Three releasing its new designs in mid-1947. The 22nd Series Packards (the 1948-1949 models), received longer hood treatment, "ox-yoke" shaped upper grilles with wraparound lower grilles, and, of course, "inverted bathtub" body lines. New for the 22nd Series, the 1948 Packards had a new body style, the "Station Sedan," which was a woody station wagon. Packard called its new body style the Station Sedan because it sounded more elegant than "station wagon." This particular Station Sedan comes to us from a longtime southern-based collector who had displayed the car at a Concours d'Elegance event. Under the hood is a 288 Cubic Inch Inline 8 Cylinder engine with a single 2 barrel carburetor that pushed out 130 horsepower back in 1948. The 288 Straight 8 is hooked up to a 3 speed manual transmission that is shifted using the column-mounted "three-on-the-tree" shifter. This beautiful Packard Woody sits on 4 wide whitewall bias-ply tires with Packard Hubcaps, which give this car a truly classic look. The exterior has been repainted in a beautiful Arizona Beige and the wooden body panels are in fantastic shape. The chrome and brightwork, including the Comorant Swan Hood Ornament, around the exterior of this Woody Wagon has a superb appearance. The metal sun visor is in incredible condition and is believed to have been a dealer-installed option back in 1948. The front and rear bench seats have been reupholstered in beautiful brown imitation leather that has a beautiful period correct look. The door panels, dash, and steering wheel are all in their stock configuration and are in wonderful shape. The rear cargo compartment features treated wood with polished bed strips tying the interior look to the exterior panelling. The woodgrain dash is equipped with a 110 MPH speedometer, temperature gauge, oil pressure gauge, amp gauge, fuel gauge, clock, and AM Radio. If you're looking for a rare, show-worthy classic car that can fit the whole family, this 1948 Packard Eight Station Sedan would be an excellent choice. Give us a call today!