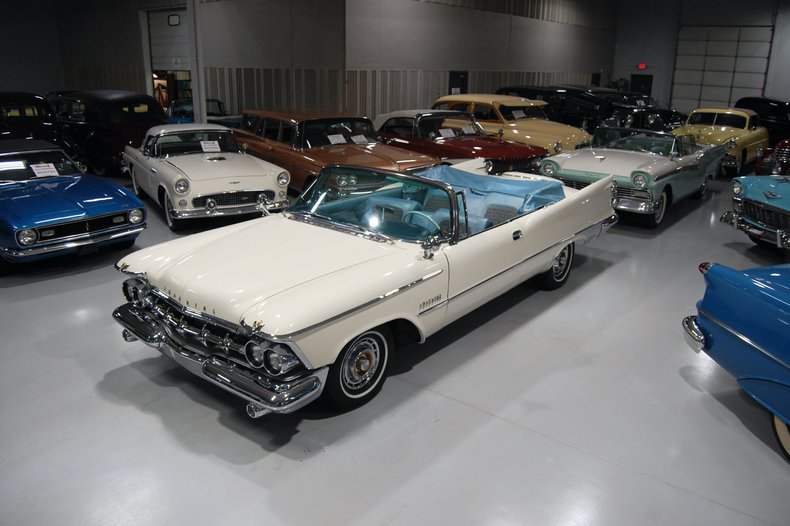 This 1959 Imperial Crown Convertible is an impressive wing car that has a fantastic 50 looks! In 1954, Imperial was spun off from Chrysler as its own brand and began to receive its own unique styling and personality a year later in 1955. Around this same time, the Chrysler products experienced a stylistic renaissance under Virgil Exner's "Forward Look" program. The Forward Look cars took inspiration from the aviation industry and its aerodynamic designs. The cars went from old-fashioned and boxy, to sleeker, lower, and longer which led to a more aerodynamic and more stylish product. The most iconic design feature from the Forward Look era were the wings that protruded from the rear quarter panels and that grew as the era progressed. Today, classic cars from the Forward Look era are affectionately known as "Wing Cars" for their iconic rear wings that defined the 50s style. The '59 Imperials featured "jazzed up" front ends with chrome encased headlight pods that were linked together by a center grille comprised of 5 curved vertical pieces of chrome. Another identifying feature on the '59 Imperials were the "Flight-Sweep" trunk deck lids that gave these classic mopars a faux continental kit look from the rear. Crown emblems on the front fenders helped differentiate the Imperial Crowns from the lower level Imperial Customs. This particular Imperial Crown Convertible underwent an impeccable restoration several years ago where it is believed that many new old stock (NOS) parts were used. Under the hood on this Imperial is a 413.2 Cubic Inch V8 engine with a single 4 barrel carburetor that pushed out a whopping 350 horsepower in its day. One of the coolest features on this Mopar is that the TorqueFlite Automatic Transmission is shifted from the Push-Button Shifter on the dash, which was an iconic feature across Chrysler's winged Forward Look cars of the day. Being that Imperials were the top-of-the-line Chrysler models of the day, they came loaded with factory accessories and customer ordered options. The '59 Imperials all came with power steering which makes turning this large, 4,850 pound, cruiser much easier and makes driving much more enjoyable. Power brakes was also standard equipment on these behemoth Imperials to provide improved stopping power. The Ivory White exterior is in fantastic condition and gives this '59 Imperial an elegant, elevated look. The black vinyl power convertible top is in superb shape and goes up and down with the simple push of a button. The chrome and brightwork are spectacular around the exterior of this Imperial Crown. This 1959 Crown Convertible sits on 4 whitewall radial 235/75R15 tires with 59 Imperial wheelcovers, further elevating the exterior look of the car. The interior on this 1959 Imperial Convertible screams elegance and class! The Blue Leather Bench Seats have beautiful blue cloth inserts and the front seat is easily moved using a 6-way power switch. All 4 windows are powered and are operated using switches. The futuristic stock dash is equipped with a 120 MPH speedometer, temperature gauge, battery gauge, gas gauge, oil pressure gauge, clock and AM radio. An AM/FM/Cassette entertainment system is mounted tastefully under the dash as well so that you can listen to all of your tunes while cruising down the road. Whether you're looking for your very first classic car or you have a garage full of wing cars, this 1959 Imperial Crown Convertible would be an excellent choice. Give us a call today!