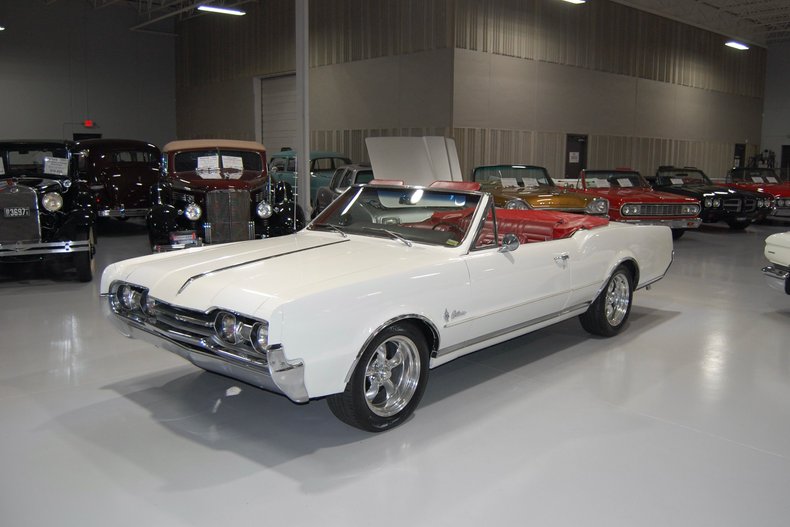 This 1967 Oldsmobile Cutlass Supreme Convertible is loaded with options and is ready to become your cruiser! 1967 was the second year for the Cutlass Supreme which was a step up from the standard Cutlass and 2 steps up from Oldsmobile's F-85. Under the hood of this '67 Olds is the 320 Horsepower Jetfire 330 Cubic Inch 8 Cylinder engine with a Single 4 Barrel Carburetor, which was standard equipment for the Cutlass Supreme. Anybody can drive this '67 Cutlass Supreme because it features an Automatic Transmission. It is also quite enjoyable to drive this classic Oldsmobile because it's loaded with many modern driving amenities, including power steering, power brakes, and even factory cruise control. The New Black Vinyl Power Convertible Top and goes up and down with ease with the simple push of a button. On days where it's too hot to have the top down, you can even turn on the Factory Air Conditioning! This '67 Cutlass has also been refinished in its original Provincial White Color. The Red Vinyl Bucket Seat interior is correct for the car and it is in very nice shape. The dash appears as it did when this Cutlass Supreme rolled off the Lansing, Michigan factory floor. The trunk is well detailed and includes a new trunk mat. If you're looking for a fully loaded 60s convertible cruiser, this 1967 Oldsmobile Cutlass Supreme Convertible is the car for you!